HIV appeared not so long ago in the world, less than forty years ago,, but during this time the disease has spread throughout the world and tens of millions of people hit. immunodeficiency virus threatens dire consequences, the development of AIDS and death. In the context of this disease pandemics every person needs to know, how to protect themselves from infection. In this article, the reader will get important information about the symptoms of the infection in women and men, its effects and treatments.

Features of the disease

HIV - human immunodeficiency virus - infection, where the first case of infection was registered in 1981 in the United States of America. Since that time, it actively spread across the globe: currently about 9000 a person is infected with HIV every day.

The appearance of the virus can be seen in the photo: 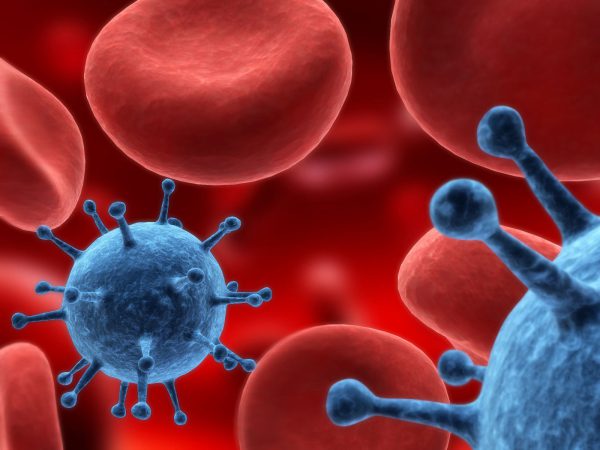 There is no clear answer to the question, Where did this disease. The most widespread it has received in the countries of Central and Southern Africa, therefore adopted the view, that the pathogen is transmitted to humans from apes - chimpanzees - while butchering carcasses.

Immunodeficiency Virus is considered "slow" virus with a long asymptomatic period. Many people develop AIDS only through 10-15 years after infection. But there are cases (10% people from among all infected), when the disease develops rapidly.

The causative agent affects and suppresses the immune system so, it becomes unable to protect the body from any infection. This occurs when an AIDS as a final stage of HIV.

There are two varieties of the virus:

When injected into the blood pathogen fixed on blood cells and in lymph nodes, responsible for the immune system. Virus multiplication begins active until, while protecting the body will react to the "invasion". According to this principle the disease spreads throughout the body. First, the immune system is not able to adequately respond to infection, and then he suppressed the virus.

Attention! HIV has a high degree of variability, protection system simply does not see the danger.

How can and can not become infected with immunodeficiency virus?

The main methods of HIV infection:

Among women, affected immunodeficiency virus, it focuses in the vagina, its secretions and cervical. The main risk of HIV transmission - from man to woman, because the vagina is in contact with the sperm from the penis much longer, than a male member of the vaginal mucosa.

The probability of infection during oral sex is low, but it is also possible, special, if a woman inadvertently scratch teeth member.

Attention! It is recommended to use condoms, but it must be stressed - condoms only reduce the possibility of infection, but do not rule it.

Usually, medical institutions responsible approach to the verification of the donor and the deactivation of the virus, but the tests can not confirm the presence of the pathogen, if it is already present in the blood, but the antibodies the immune system has not yet been established. This so-called "blanking", which increases the likelihood of accidental contamination.

Important! HIV-infected mothers is contraindicated feed her baby breast, because the virus is found in breast milk and can be easily passed on to the baby. Development of immunodeficiency in the child's body does not stop, because the immune system at this time is very weak.

Among other methods of transmission of the disease:

should know, HIV infection can not be:

Important! The risk of infection is possible only in the event, if in biological fluids containing infected blood.

Symptomatology of the disease in women and men

Before the beginning of the symptom free period, which can last several years, about half of the infected are shown initial signs of infection. Common symptoms during the incubation period of HIV:

Rashes from HIV on the hand can be seen in the photo:

It is possible to distinguish characteristic features of HIV infection in women:

If untreated, about a year after infection in women:

Highlighting the unique features of HIV infection in men, It should first be said about:

Subsequently, if untreated infection can trigger the development of pneumonia and brain pathologies.

Speaking about the appearance of tumors, first of all to say about Kaposi's sarcoma. So it is one of the symptoms of HIV, which manifests itself on the skin tumors, large blue spots and rashes in the form of nodules.

Kaposi's sarcoma can be seen in the photo:

Diagnosis and treatment of HIV infection

When the disturbing symptoms should immediately see a doctor for diagnosis. It is recommended to pass the virus on the immune analysis:

Attention! The earlier the diagnosis carried out, the higher the chance of successful treatment of infections.

Unlike AIDS HIV cure possible. The patient is assigned to receive antiretroviral drugs, have been prevented (treatment) the so-called opportunistic infections.

The best-known medicines, which are prescribed for patients with HIV:

The described agents have side effects: nausea, diarrhea, enlargement of the liver, neuritis, stomatitis, etc.. The possibility of using any medication determined by the physician based on the patient's condition.

antiretroviral drugs, as a means of tumors, fungi and microbes, provided to patients free of charge

They are caused by bacteria, who permanently live in the human body. In a healthy state, they are not harmful, but in conditions of immunosuppression behave as pathogens in relation to the body. Which they cause disease?

Detailed information on prevention, treatment and diagnosis of immunodeficiency virus described in SanPin "HIV infections", This document is useful for every Russian, it can be found freely available on the Internet.

Effective protection against this disease mankind has not yet developed, despite extensive research throughout the world. Because in only general measures can be identified as the prevention of this dangerous infection:

Important! If you have any doubt, both partners should get tested for HIV.

using a condom, you need to consider certain rules:

In Russia, the number of people, affected immunodeficiency virus each year increased by 10%. AT 2016 by every citizen should be paid to the prevention of diseases, behave prudently, to avoid infection. The consequences are too serious, to behave irresponsibly. In this article, the reader will learn important information about HIV, how the virus is transmitted and treated.