Hornets belong to the genus of social wasps, However, conventional wasps compared to the hornets are converted into harmless insects. Hornet bite is very painful and can lead to serious consequences for human health, given the grave danger to life. Hornets reach quite large compared with wasp - up 55 mm in length. They are not set up to attack first, However, when human intrusion will be protected.

Why is dangerous bite?

How dangerous hornet sting, compared to bee stings? Hornet administered in 2 times more toxin. Besides, if the bee can sting only once, the Hornet is able to repeat this action several times. After being bitten by the sting is left in the skin, the insect does not die. Hornet takes it and can cause another blow. In an emergency it will allocate a special smell, which respond to other hornets, therefore the risk of serious damage increases significantly.

Sort out, Whether the bite is dangerous, can, Having considered the composition of the venom, which identifies the insect at the time of the bite:

Bite hornet accompanied by the appearance of certain symptoms. In this case, the bite causes not only local symptoms, but also the change of the human condition in general,.

Common symptoms of a hornet sting:

The poison has an impact on the functioning of the nervous system. The first feature is the excitation, then appear inhibited reaction.

The bite swells strongly. Severe allergic reactions can result in angioedema or anaphylactic shock. An allergic reaction is specific the bite body response, in which he needs additional support in the form of desensitizing therapy.

Particularly dangerous insect bites for children. In children, allergic reactions manifest themselves stronger, and all processes run faster. Therefore, if a child was bitten by a hornet, you should immediately take him to the hospital.

Among the local symptoms include:

In the photo you can see, It looks like a hornet sting.

With adequate therapy and first aid effects from the bite usually does not occur. The period, during which symptoms disappear evolved it depends on many factors, in particular - on the body's ability to resist the action of the poison and its clearance rate.

A few hours after the bite people nausea, vomiting, hyperhidrosis, signs of intoxication. Especially dangerous are multiple hornet stings. However, a single bite can be deadly. Die of hornet sting may be due to an allergic reaction, or if, when an insect bite in the throat or tongue. Such bites provoke swelling, overlying the trachea, with the result that the person is choking and death occurs. No less dangerous is the situation, where the bite occurred in the head or great vessels. According to him the toxin spreads very rapidly through the body, including penetrates into the brain.

Important! Even with prompt medical assistance mortality hornet sting is high - about 15-20%.

What to do when a hornet sting?

At home, you need to view the site, where biting Hornet. If the wound were pieces of sting, it should be gently remove with tweezers. Bitten should be released from tight clothing, unbutton, remove the tie, remove rings and jewelry.

The bite should be washed with soap and water. To prevent the development of allergic reactions taking an antihistamine.

Recommended intake of kordiamina, to prevent a sharp pressure drop.

It is important to provide a comfortable environment for the victim - put, so it was convenient, shelter, otpoit tea. 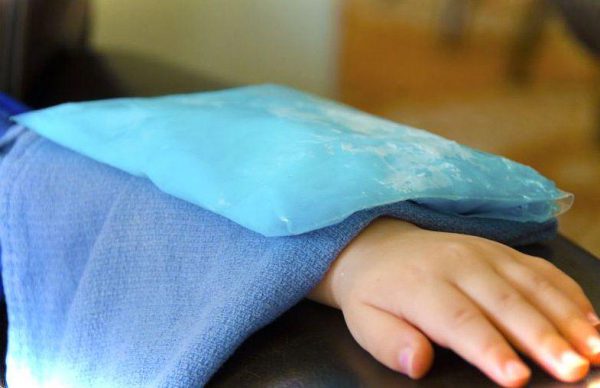 It is forbidden to take alcoholic drinks, as they may provoke strengthening of edema.

If you experience the first signs of an anaphylactic shock is necessary to lay the person on a hard, flat surface, follow the breath and immediately call an ambulance. Signs of anaphylaxis include: pronounced pallor, a significant drop in blood pressure, clammy sweat, thready pulse.

note! Once bitten hornet venom out of the wound can not be squeezed out.

Trying to squeeze out the poison will lead to the spread of the toxin to nearby tissue. In the first few minutes after the bite can try to suck him the example of the snake. Combing, washing with water from a local reservoir may lead to infection penetration into the wound from the bite of a hornet, which will lead to the development of complications.

After being bitten by a hornet it is imperative as soon as possible to take an antihistamine. For a new generation of anti-allergic agents, that long run and do not cause drowsiness, relate:

First aid for the bite of a hornet is processing the sting of hydrogen peroxide, or diluted ammonia. In cases, when the hand is not Pharmaceuticals - for taking clean water washing.

After wiping the wound is applied wet sugar - this is another method, allowing to draw the poison. Sugar on top put a wet cold towel. This application will work for 10 minutes - sugar must be removed after this time, and instead attach compress with citric acid or acetic. The acidic medium will safener alkali hornet venom. In an extreme case,, the wound can make a piece of lemon, apple.

To slow the spread of the toxin through the body to the site of injury pin bottle with ice water. This intervention will also slightly reduce swelling.

Besides preparations for internal receiving treatment comprises an ointment for topical application:

For oral administration are also shown sorbents, which will reduce the toxin level in the blood, but, Consequently, and intoxication. You can use Polisorb, Entyerosgyeli, Smecta, Activated carbon.

Bit to remove inflammation and flushing of the following tools to help:

of course, These funds can not be compared in their effectiveness to pharmacy drugs, however, if no drugs on hand, you must take all possible measures and seek emergency medical attention.

Reduce soreness help application with aspirin. Tablets should crumble, diluted with water and applied to the site of the bite. You can also use salt lotion, soaking a fleece in sea salt solution.

Be sure to drink plenty of liquids.

The first thing to think about the safety of children. Before leaving for nature need to tell them about dangerous insects, show on photo, It looks like a hornet.

It is important to observe the rules of conduct when dealing with insects.

If an insect bite yet, must immediately give first aid. Adults should remember, antihistamine that should always be at hand.

If you go on nature, clothing should choose closed, muted tones.

Important! If your site you found the nest and want it removed, the first thing, what to do - to take protective measures. So you need to get dressed, was closed to the whole body.

In the case of the bite should not wait, when will the response of the body. In many ways, the effects depend on the localization, but in any case it is better to see a doctor. bee stings, axis, hornets can be very dangerous.